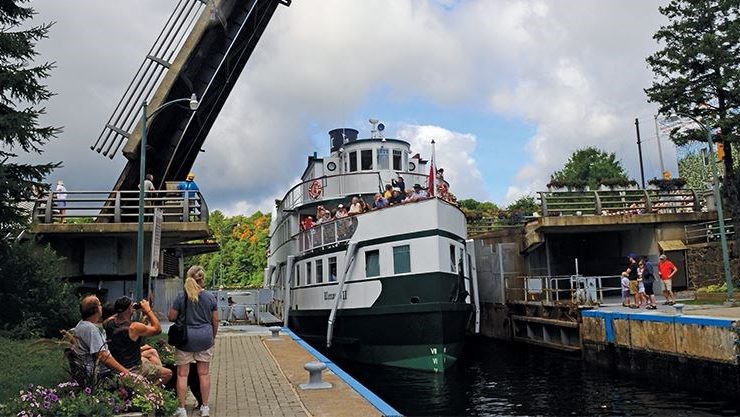 From the pages of Muskoka Life magazine

The locks at Port Carling are viewed as something of an engineering marvel. Tourists flock here to admire the spectacle of passenger craft and, several times per year, the Segwun, passing through between Lake Muskoka and Lake Rosseau. Yet few people pay much attention to the bridge that spans the locks.

This bridge, or rather, the succession of bridges that have stood here over the past century and a half, are considerable engineering feats in and of themselves. After all, they’ve had to be designed to allow for even steamships to pass, either by swinging open or lifting up.

Most people don’t think about this bridge until they are inconvenienced by construction work or maintenance issues. Well, things were even more difficult when settlers first arrived in Muskoka, as the rapids at Port Carling represented a true obstacle to navigation. Passengers and cargo would have to disembark steamships, portage across to Lake Rosseau, and then re-embark again. It was a time-consuming process. A.P. Cockburn, who owned the majority of these vessels and was a Muskoka representative in provincial government, pressed for a navigational lock at Port Carling. His urgings were successful, and construction began in 1869. Difficulties with high water and the need for extensive blasting slowed work considerably so the lock didn’t opened for navigation until November 1871.

The completion of the locks had serious repercussions that should have been obvious to everyone involved, but which no-one seemed to have planned for: the locks left a gap in the Joseph Road that effectively severed east-west traffic. Incredibly, nothing was done to remedy this until 1874, when lobbying by locals finally spurred the government into action.

Before the locks, passengers disembarking at Port Carling had an adventure merely getting ashore. Vessels could not get up against the shore, so would have to extend a long gangplank. While crew members held down one end, passengers jumped ashore from the others.

At this time, $3,000 was allocated to fund the construction of two bridges, one across the Indian River and the other over the locks. The former, completed by the end of the year, was a fixed structure, 88 feet in length, with a double span supported by a crib in the centre. The latter wasn’t ready until the following year, and with good reason. As a swing bridge, it was a more complex design.

Around 1914, council petitioned for a new dam, repairs to the locks and wharves, and new bridges to repair the aging existing ones that were now so rotten they were dangerous. Nothing was done as a result of the onset of the First World War, and indeed it wouldn’t be until the winter of 1921-22 that the desperate need for new bridges was addressed. A pair of steel structures were built, 202 feet in total length and set on concrete abutments at a higher elevation than the original.

Traffic throughout Muskoka had increased steadily during the 1960s, and Port Carling was no exception. Weekend and summer traffic led to maddening congestion and delays in the village. To remedy this, there was talk of a bypass around the community – as Gravenhurst and Bracebridge had been bypassed by the new Highway 11 – that would see traffic diverted south of Port Carling and across a high-level bridge over the Indian River. Much to the relief of locals who feared the economic implications of traffic bypassing their village, such plans were shelved in favour of a less costly renovating of Highway 118.

The swing bridge over the canal at Port Carling is closed in this picture. One of the improvements in the locks over the years was the installation of electric gates to speed up the locking procedure. Lockages that once took as long as 30 minutes are now done in less than 10.

Government engineers decided that traffic would be improved if the streets through Port Carling were raised and realigned to get rid of some of the curves, which meant the demolition of four historic buildings in town. At the same time, the old one-lane bridge would need to be replaced with a new one accommodating two lanes of traffic. It was time, anyways; the bridge’s foundations were crumbling and the iron had deteriorated from the effects of age, weather and road salt. Work began in spring of 1973 and wasn’t completed for two years.

The grand opening of the new cantilever bridge was set for July 3, 1975. Hundreds of locals and seasonal residents turned out to see the bridge raised for the first time, and Ministry of Transportation officials were on hand to cut the ribbons and bask in the glow of a work well-done – except when the bridge began to rise, the crowd gasped in shock as the asphalt began to slide down like black ooze, right into the pit below containing the machinery. Officials were red-faced, the onlookers a blend of horrified and amused. It would be two more months before the bridge finally opened to traffic.

This bridge has served Port Carling – indeed, all of Muskoka – ever since. Recent construction work done in spring 2017, while perhaps inconvenient, was important to ensure the continued efficiency of road and marine traffic – the very things that earned the community the title of ‘The Hub of Lakes.’ The bridges and lock have worked together, symbiotic, for almost 150 years to assist in the movement of people and commerce.